A Diabolical Plot by the BJP’s Assam State Government to Target Minorities: Report on Recent Eviction and Killings in Dhalpur, Assam

A central AIDWA team visited the Dhalpur area on October 6, 2021 where citizens were forcibly evicted by the Assam state government, leading to the death of two persons in police firing.

The forcible evictions in Assam leading to the death of two farmers, one of them a 12 year-old boy, in police firing on September 24, 2021, are utterly condemnable. The entire country has seen the shocking video of professional photographer Bijay Shankar Baniya, hired by the district administration, kicking and punching the man who lay motionless on the ground after the police bullet hit him on the chest. The police did nothing to stop him. The Assam incidents once again prove that targeting the minority community has been at the centre of the hate politics pursued by the BJP with the aim of polarising Indians along religious lines.

Just 10 days after this Assam incident, another horrifying incident occurred on October 3 at Lakhimpur Kheri in Uttar Pradesh, which showed the very same hate politics of the BJP. A convoy of cars belonging to the BJP’s Union Minister of State for Home Ajay Mishra Teni, one of them driven by his son Ashish Mishra Teni, mowed down four Sikh farmers and grievously injured several others who were peacefully returning after a demonstration. This was a clear attempt to sharpen the Hindu-Sikh divide. A journalist who happened to be a Hindu was also mowed down by these BJP monsters. There were huge protest demonstrations all over the country denouncing this massacre. Today, although one month has passed after this massacre, the BJP Minister still continues in his post and is not arrested for murder.

The RSS-BJP has been indulging in this hate politics ever since their inception. This has led to innumerable communal riots all over the country, which have killed thousands of innocent people. They must be taken head on by all patriotic people of our country.

AIDWA sent a team in solidarity to the places where these forcible evictions and police killings occurred and has resolved to help the people, especially women and children in distress in these areas. We are giving here the report prepared by the team.

A central AIDWA team consisting of assistant secretary Niyati Barman, joint secretary Kaninika Ghosh, CEC member Soma Das, Assam assistant secretary Anu Rizal and West Bengal state secretariat member Bilquis Begum visited the Dhalpur area on October 6, 2021 where citizens were forcibly evicted by the Assam state government, leading to the death of two persons in police firing. The government had decided to evict the people in Suratuli, Tirakara, Dhalpur, Khanua and Garukhuti villages. Dhalpur is surrounded by the Brahmaputra. Evictions were also carried out in Kirata Goreswar. This eviction was done under the pretext of starting an agricultural farm in Garukhuti. The team met the affected families, especially women, and was horrified at the brutality and insensitivity shown by the authorities. Women gave heart-rending accounts of the devastation that these evictions have caused in their lives.

We travelled by car from Maligaon Burrabazar, crossed a small stream (Assamese: Nanoi) and reached Nisshalmira where there is a mixed population of Muslims and Hindus. They live together absolutely amicably without any dispute.  But the BJP-RSS is trying divide them in the name of religion.

Thousands of people were mercilessly evicted and made homeless overnight. Two farmers were killed in the indiscriminate police firing. One of them was a 12 year old boy. The homeless are now virtually living under the open skies facing either heavy rains or the blazing sun. Women are now living in the most insecure and pathetic conditions. They are living in some temporary shelters. They are without food, drinking water and proper sanitation. They are using the unpurified water from the river and stream nearby for all purposes. The situation for women during their menstruation is harrowing as the same river water is used for washing purposes. Children and old people are at tremendous health risks. Pregnant women are in a very precarious situation due to unavailability of health facilities and nutrition. Travelling to the nearest hospital is very difficult for them now. Women and children broke down when narrating their untold sufferings.

When we told them that we are from a women’s organisation and stood by them in their fight for justice, they instantly surrounded us, especially women who could not control their tears. Aktunissah, Zubeida, Anwara Begum and others told us that they were not given sufficient time to make alternative arrangements, nor did the government provide them with any rehabilitation opportunities. Their belongings were thrown away without any warning. The women failed to understand why they had to see this devastation with their own eyes and caused by their own government! They had 10 anganwadis and ration shops in this area. Many projects of the government have been implemented here. Yet they were declared as illegal residents and were evicted. Even their graveyards have not been spared. Their anganwadis and madrasas have all been destroyed. The children used to go to anganwadis as madrasas were closed due to the pandemic. After the destruction of these anganwadis, the children are just roaming aimlessly here and there. Whatever little opportunity the children had of getting education has now been snatched away. 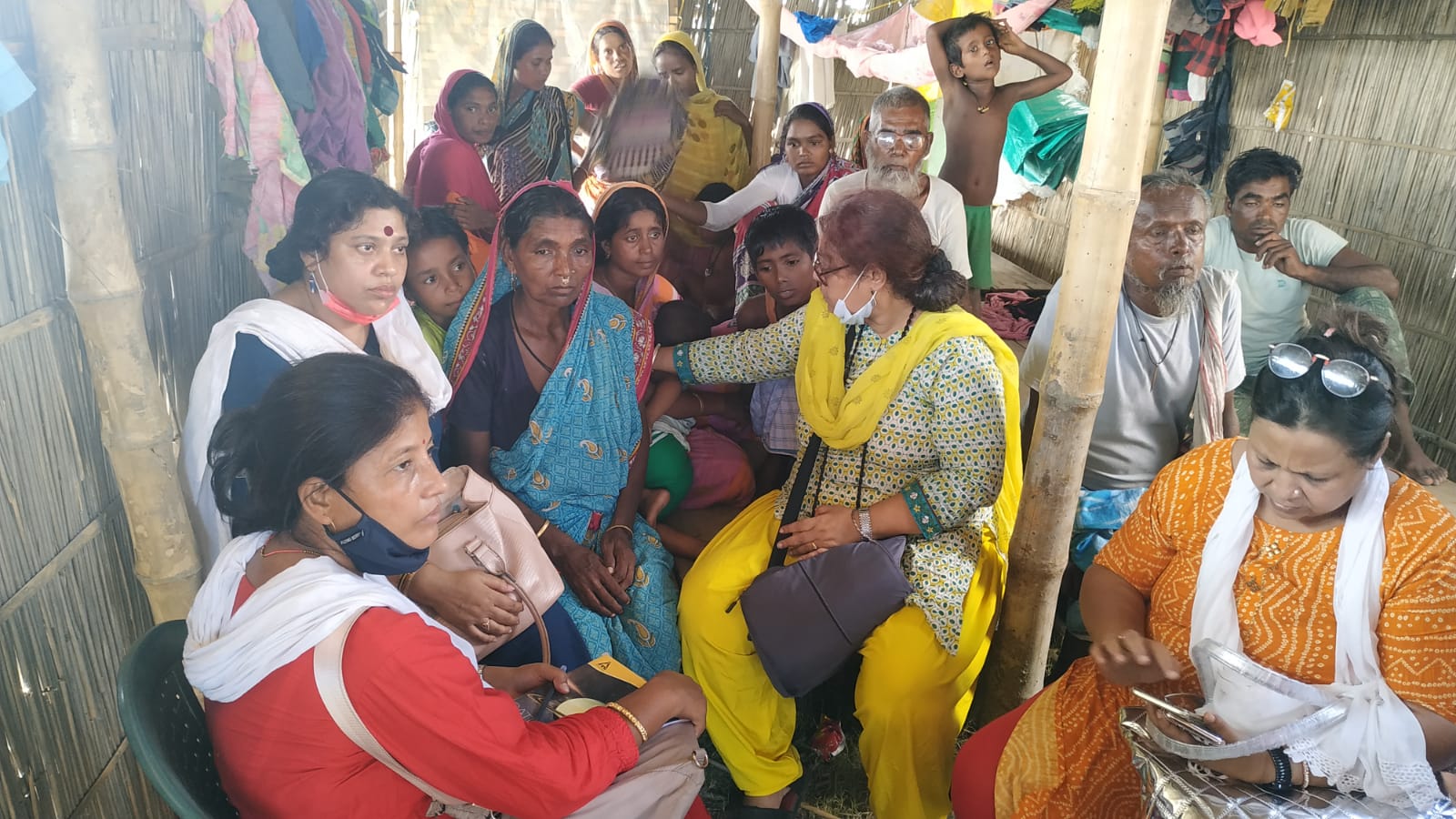 A woman named Mehezabeen said how inhumane the government was that it did not even care about the children even though they have proper papers and documents. A Muslim woman (unwilling to disclose her name) told us that they were evicted with the aim of destroying their lives - devastating their lands, fields, livelihood, everything, in spite of the fact that they had lived there for more than 50 years. Other families are living in great fear and distress that maybe it is their turn next to get uprooted.

We started moving on bikes and saw miles after miles of land destroyed by JCB machines and dug up by tractors. The road was uneven and full of potholes. The bikers were youth who had worked in the fields earlier. They showed us the places where they used to sit and chat, where there had been tea stalls. Today there is only emptiness for miles. There are some remains of the iron fencing which shows that people lived here earlier.

In the fields, they used to grow gourd, cabbage and cauliflower. This helped in making vegetables available in the local market at cheap rates. These fields are now submerged. The women informed us that now the prices of vegetables are exorbitant.

The team found that the evicted families are legal residents of these places. Women showed us their ration cards, Aadhaar cards, voter identity cards as well as the land papers. We met some of the old people who said that they had been residing in this place since 1970. Though they are legal voters, there is a continuous and systematic hate campaign against them that they are doubtful citizens and illegal encroachers. They are being targeted only because they are Muslims. The administration has started farming on the land taken over by evicting them and obstructions have been raised around these areas to prevent the people from reaching there.

We travelled two more kilometres and reached Mainul Haque's house. He was killed in the police firing. His widow could not hold back her tears in front of her two sons, Maksidul and Moqades Ali and daughter Mansura Begum. She cannot forget the painful memories of that day which devastated her life. Mainul was not only shot dead but a journalist jumped over and attacked his dead body while the police stood by quietly watching. They did not stop him. Her father-in-law Maqbul Ali was in a state of shock. He was not being able to understand whether to talk to us or to wipe tears of his grandchildren or to gather food. Without any earnings, they failed to obtain their food. These people do not get food unless somebody comes and provides them with help.

The youth also narrated the same tragedy and helplessness. An elderly man (unwilling to disclose his name) narrated that he had been staying there for as long as 70 years, has all proper documents, voter ID, Aadhar card, name on voter list, yet he has also been evicted. He pledged to fight till the end for their rights. Two of the bikers told us that they were beaten up for taking various delegations who have been visiting these places. We wanted to go to that spot where they had been beaten but they stopped us, saying that this would cause them more problems. This is the situation of the prevailing terror!

The AIDWA Assam state and district committees have submitted memoranda to the state government demanding an immediate stop to the inhuman evictions, proper compensation for the evicted families and their rehabilitation, and institution of a high-level inquiry into the firing in the Dhalpur and Garukhuti areas on September 24, 2021.

The administration has not rendered any help so far since the evictions. Women are at a loss to find ways to lead their lives. They are very worried about the future of their children. In despair they said, “What should we do now? We are Indian citizens. But our own government has treated us as enemies!”

AIDWA will campaign against the communal, fascistic politics of hatred indulged in by the BJP-RSS. We shall have to unitedly take this struggle forward to preserve the democratic and secular character of India. Let us campaign against the atrocities committed by the Assam Government in Dhalpur and for justice to those victimized for no other reason except that they belonged to the minority community.